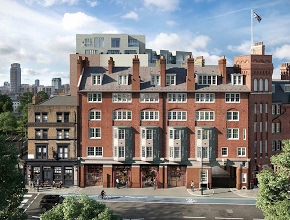 All Hadston's buildings on the map

Develops projects only in London
for sale

Formed in 2010, Hadston is a prominent property development company based in Wiltshire. Unlike other construction companies, Hadston is focused on developing less traditional forms. At the same time, the developer pays a lot of attention and efforts to the development of communities, namely the necessary infrastructure. This aspect encompasses areas such as the construction of schools, a variety of residential buildings, affordable housing, research centres, data centres and digital networks. The Hadston team consists of professionals with experience in various fields, including the industrial sector.

Hadston also has two specialized subsidiaries: Hadston Education Limited and Hadston Projects Limited. Recently, the Hadston team has been developing several projects. One of these is Corsham Institute, a registered charity that is the foundation of a new higher education institution in Wiltshire. It is based on digital society and linked to similar concepts in the US and Asia. The organization's UK partners include Bath Spa University and Wiltshire County Council. As for Bath Spa University, the organization has already signed a contract with it and managed to obtain planning permits for the first phase of the Institute. The Institute creates a new campus in Wiltshire.

The Hadston team also designed a 2,000-apartment layout in downtown Cardiff using pension-funded investments. Most of the apartments are examples of affordable housing. A new primary school and public retail buildings were also built. Affordable housing on this project accounted for more than double the Council's planning policy, and affordable housing, backed by Cardiff County Council, is a driving force for future development.

Besides, the Hadston team was engaged in digital knowledge sharing, collaborating with research and training centres located on the former Department of Defense building territory in Wiltshire.

Hadston is a leader in the development of digital technologies, which are very important for a comfortable life in the 21st century, so the company constantly invests in a number of new digital information and communication solutions. The company also cooperates with many foreign partners in this area.